To find about more on heraldry and coats of arms visit Heraldry & Coat of Arms webring where you will find links to plenty of sites dealing with this subject.

The following descriptions of some HALE coats of arms are taken from Burke's General Armory. 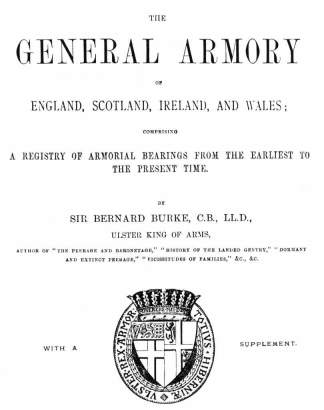 Hale (Sir FRANK VAN HALE, eighth son of FREDERICK DE HALLE, stated to have been a natural son of ALBERT, King Of the Romans, was among the followers of the Earl of Derby into Gascony, 1344, and was elected a Knight of the Garter, 1359). Gu. a wyvern, wings elevated and crowned or, pendent from the neck an escutcheon of the field, thereon an eagle displ. with two heads ar. all within a border az. charged with six lioncels ramp. and many fleurs-de-lis alternately of the second.

Crest - On the battlements of a castle ar. a wyvern sa. wings addorsed guttee d'or, gorged with a ducal coronet, therefrom a chain reflexed over the back all gold, in the dexter claw a award erect az.

Hale (Somerton Hall; granted to JOSEPH EATON HALE, Esq.). Ar. on a chev. engr. betw. three escutcheons az. each charged with a cinquefoil of the field three towers of the last.

Crest - Upon a rock tower ppr. surmounted by a sun in splendour or, and resting upon the battlements a scaling ladder in bend sa.

Hale (Alderley, co. Gloucester; of this family was the celebrated Sir MATTHEW HALE).

Ar. a fesse sa. in chief three cinquefoils of the last.

Hale (King's Walden, on. Hertford). Az. a chev. embattled and counter-embattled or.

Hale. Ar. on a paid fusily gu. a leopard's head or.

Hale (granted to the Venerable Archdeacon HALE). Per pale az. and gu. on a chev. betw. three arrows, points downward or, a cross pattee of the second, all within a bordure erm.

ORIGIN OF THE NAME